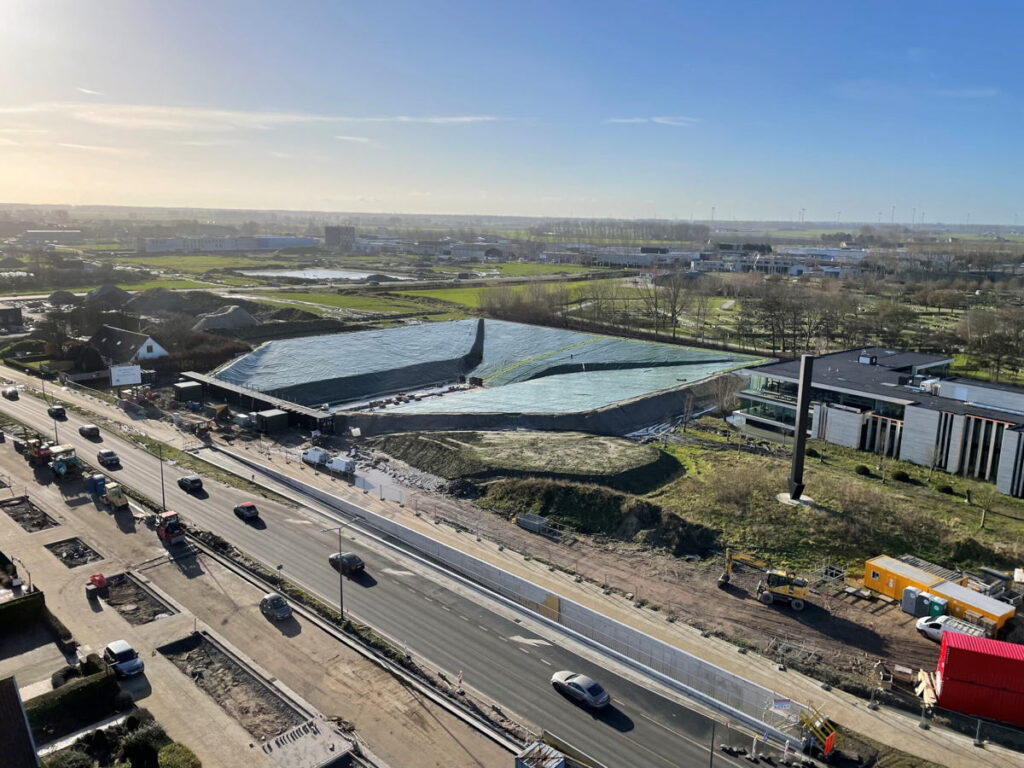 Construction on a new R&D test facility is nearing completion and the company expects to pump out its first full-size waves this Spring. Once proven, the same company will construct a surf park for the public a few miles down the road near the beach at Knokke-Heist. The tech uses a system of submerged textile that moves to push out waves...

Knokke Heist, just six miles from the Dutch border and 37 miles from the French border, is Belgium's version of Palm Beach, Florida - a playground for the multi-lingual country's rich and famous. The seaside town offers the same board rental palapas and surf-themed cafes ubiquitous to Europe's surf-rich zones, except the only thing missing here is decent surf.

The Belgian scene relies on sporadic North Sea offerings and an hour of offshore knee-high closeouts is considered a good day. Despite the slim pickings for waves, there is (like most European scenes) a dedicated and frothy crew. Most are experienced travelers simply out of necessity.

"The hardest thing as a Belgian surfer would be the inconsistent swell," said Emilie S who spends long chunks of time out of the country. "We don't have any reefs, so the sandbanks play a big role. It's usually wind swell. So there's a small surfing window after the onshores settle and before the swell totally disappears."

Emilie lives in Oostende, a 35-minute drive from Knokke-Heist, ground zero for a new wave technology by AllWaves that is currently under construction and expected to pump out waves in May, possibly April of this year. 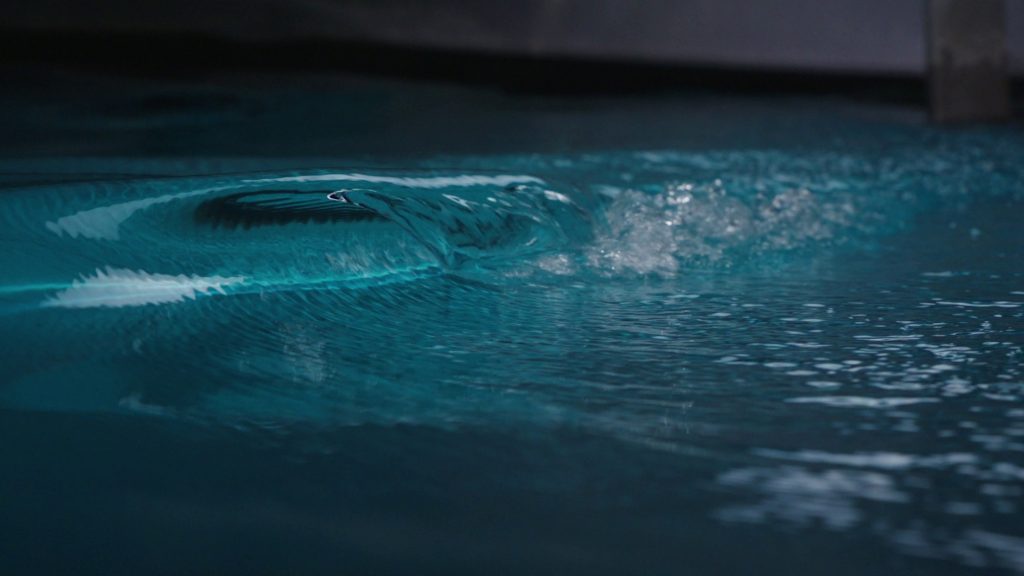 AllWaves' new wave pool design was tested in Belgium recently, producing tiny peelers like this one.

The AllWaves pool and technology is progressing with the blessings of Frank Vanleenhove, the godfather of Belgian surfing and the human who organized the first Belgian surfing federation and national championships in 1988.

"I brought the first surfboard to Belgium which we initially used behind a boat to replace our waterskis," said Vanleenhove. "But soon we were towing into small wind chop as we did not realize we could also surf the North Sea waves. Letting go of the rope taught us we could get a small ride, and after buying a bigger board in Biarritz we were soon paddling out to catch our first waves on the Belgian coast."

Two decades later he built Lakeside Paradise, a popular cable park, as well as Surfer's Paradise, a hub for the kiteboard and surf set. Now Frank plans to build a surf park using the new technology at a location near his wakeboarding facility. After years of talks with a range of companies including PerfectSwell and Wavegarden, he's aligned with AllWaves. 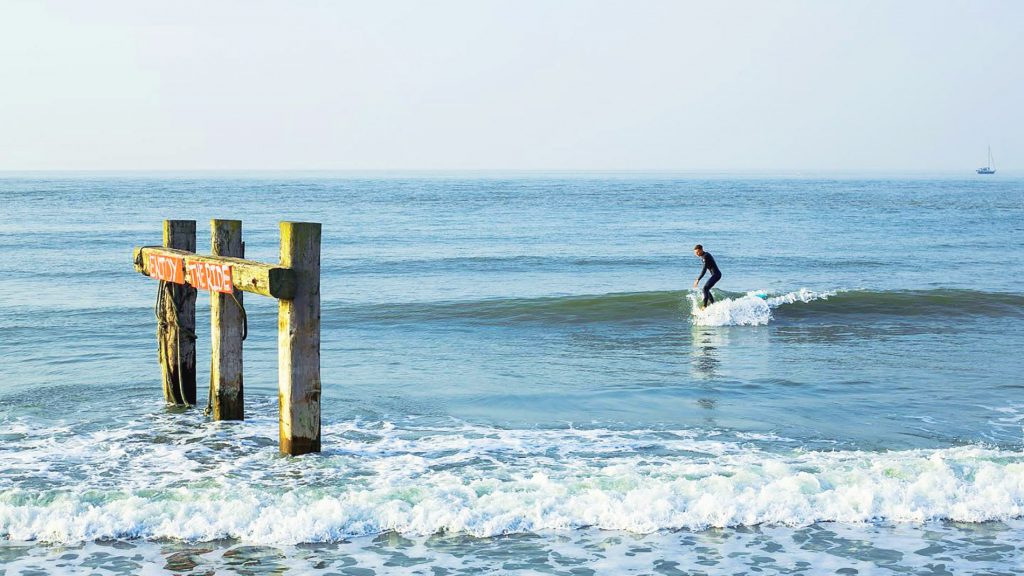 The surf scene in Belgium is dedicated and committed to anything the North Sea can throw at them. Most sessions happen in small surf. Photo by Damian Davila

There will be two wave pools. Construction is nearly done on the full-scale AllWaves test facility which is located 5 kilometres (3 miles) from the beach and Frank's businesses at Knokke Heist. After AllWaves proves their system, a second wave tank is planned near Frank's Lakeside Paradise location to be a larger, public-facing venue. The two entities are working closely together with the engineering crew at AllWaves enlisting Frank's help on wave creation.

"Most people focus only on the shape of the lip, the shoulder, the pocket and tube of a wave when observing a wave," said Frank. "To be able to know whether a wave carries enough energy to surf on, you need also to focus on the waves' backside. We want to see a rather flat shoulder with a vast amount of water that pushes the face in a perfect way. Secondly, we want to see what happens in the area just in front of the face. When water is sucked into the wave."

Frank added that displaced water is what creates a great human-made wave but is what will also damage the wave if energy is not transferred correctly. These extra waves in between the actual surf-specific waves create chop, currents and waste energy. Frank says that the test tank produced only the clean surf-able waves with no trailing waves.

The wavemakers explained to us that the community of Knokke-Heist is supporting the test facility wholeheartedly and this new tank scheduled to fire off the first waves in April will be private and used for R&D purposes (think Wavegarden Cove demo).

How does the wave pool in Belgium work?

The new technology is unique. At the bottom of the AllWaves design is a textile fabric the makers described to us as a "sort of submerged bouncy castle structure." This machine, referred to as the Wavemaker, is controlled by a hydraulic power system in a dedicated room outside of the pool. Signals from this exterior unit control the expansion, contraction and direction the submerged bouncy castle fabric moves in order to displace water and create waves.

When the wavemaker pushes out waves they break along a reef on each side of the pool. This creates right and left pointbreak waves down the length of the pool. A second reef is situated at the end of the pool. It's an A-frame reef and offers another two surf rides, this time along the width of the pool. This means that on every single swell generated, there's the potential for four surfers to ride it: two on the point (right and left, lengthways) and two on the reef (right and left, widthways). Wave production is constant with no lulls and a wave can be produced every seven seconds, so 500 waves per hour. AllWaves says this translates to 2000 rides per hour.

AllWaves says their system is specifically designed to avoid backwash and wave reflection, claiming that after a wave breaks, the water flows back into the pool without disturbing the next set of waves. 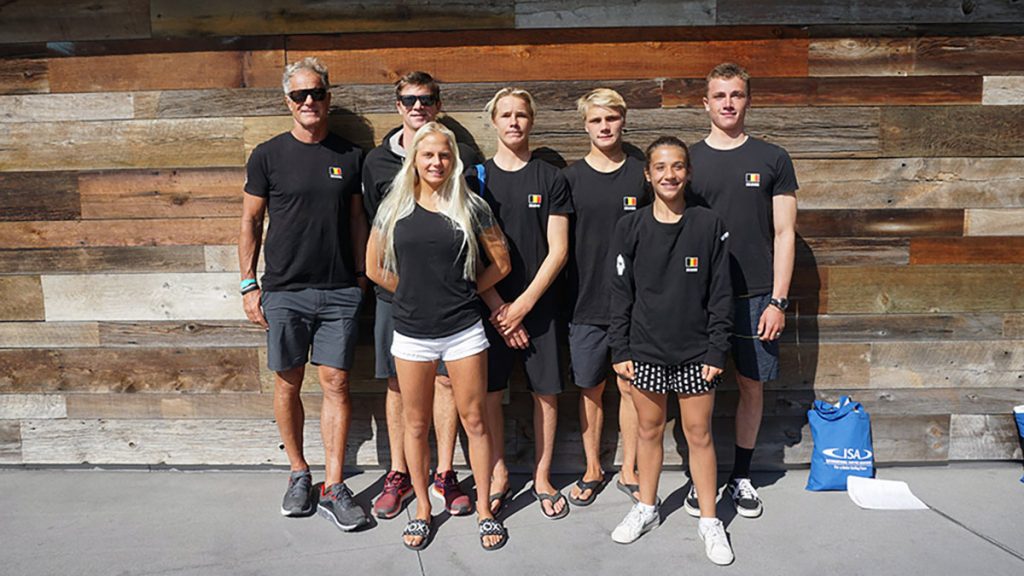 The Belgian surf team will be stoked to have access to consistent surf.

The company worked with SIOEN Industries to develop this underwater bouncy castle textile. AllWaves worked on the bathymetry together with scientific partners at Coastal Ocean Basin, a consortium of the Universities of Ghent and Leuven, and Flanders Hydraulic Research Institute.

The prototype began construction in August 2021 and has just completed the basin and high-voltage cabins. With the grid connection in place, testing can begin in April and May.

Frank Vanleenhove's surf park will be located near his established cable park. It will be somewhat larger than the test facility and he plans to operate it as a full-blown public venue.

The Lowdown: Located in Knokke-Heist, a coastal town that borders the Netherlands. The AllWaves project is humming along and construction is nearing completion. While most wave-generating systems are either paddle, plow or pneumatic, the AllWaves technology uses a giant submerged textile device to push water.

Wave Pool Construction Progress: Construction of the basin is completed. The technology is being installed and tested.

Wave Technology: AllWaves says that for each setting, the face, pocket, lip, and white water can be programmed by the company's software's algorithm. Wave production is constant with no lulls and a wave is produced every seven seconds, so 500 waves per hour. Each wave can accommodate four surfers - two on the point and two on the reef with each surfer going left or right. AllWaves says this translates to 2000 rides per hour.Hours of

Waves Per Hour: 2000 rides per hourAtmosphere: R&D centre integrated in tourist bicycle route with a viewing platform to allow everyone a sneak peak in the pool. 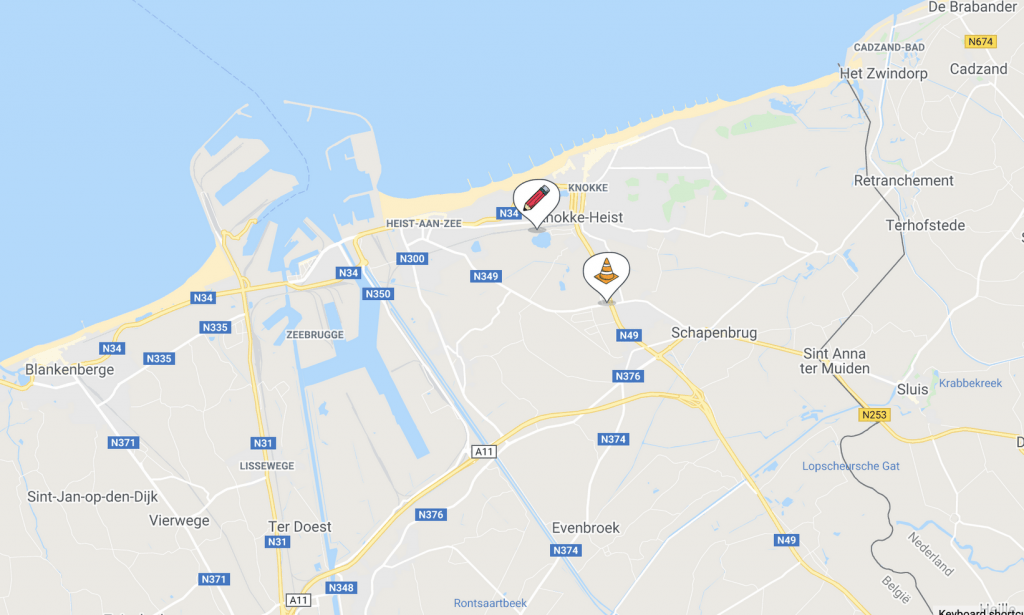 Lowdown: Knokke-Heist, Belgium is the country's frothing surf town. While there's no lack of stoke there is a lack of surf. Actually, very little. This planned wave pool will be located next to LakeParadise, a full-service cable facility by Belgian surf legend Frank Vanleenhove. SurferParadise will piggyback onto its neighbor's infrastructure - think of BSR Surf Resort and BSR Cable Park and you get the idea. The project has the support of Knokke-Heist council and community and will use technology from AllWaves, a new wavemaking company with headquarters just 5 kilometres away.

Wave's Technical Information: AllWaves says that for each setting, the face, pocket, lip, and the white water can be programmed by the company's software's algorithm. Wave production is constant with no lulls and a wave is produced every seven seconds, so 500 waves per hour. Each wave can accommodate four surfers - two on the point and two on the reef with each surfer going left or right. AllWaves says this translates to 2000 rides per hour.

Waves per hour: Claims of up to 2000 rides per hour

Aprés Surf & Turf BBQ and BBQ at the beach!

On Thursday 18 August 'Surfers Paradise' in Knokke-Heist is organising their very first Never Give Up Day Challenge!